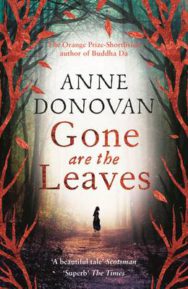 Home > Fiction from Scotland > Gone are the Leaves

Gone are the Leaves

Deirdre first meets the boy on a crisp autumn morning when the golden leaves gild the glen. He is small and fearful and remembers nothing of the life he has left behind. From that moment their lives are destined to intertwine. But when the boy’s lost past begins to threaten his future and Deirdre’s mother begins arranging her marriage, both lives will change forever. The adult world is about to take them to places they never could have imagined…

Reviews of Gone are the Leaves

* Utterly mesmerising and moving. A strange, Scottish fairytale told in lilting, hypnotic prose — Eve Harris, Booker Prize-longlisted author of The Marrying of Chani Kaufman * Gone Are The Leaves is a poetic and deftly-crafted tale, richly told in magical language – a quest for purity, truth and ultimately, love. With consummate skill, Anne Donovan has produced a wonder of daring and passion, a mythical page-turner — Kitty Aldridge, the Baileys Prize-longlisted author of A Trick I Learned from Dead Men * A beautiful tale … with such a passion for the language, and such an ear for its rhythms and alliterations, you'll find yourself wishing all books could be written like this. Perhaps it's too far to suggest that this was the book Donovan was born to write, but it fits her like a glove Scotsman * Anne Donovan is outstanding — Melvyn Bragg * Quirky and endearing. Don't wait until your next life too read it Sunday Herald on Buddha Da * An enchanting novel in which ordinary lives are illuminated with extraordinary charm Daily Telegraph on Buddha Da

Anne Donovan is the author of the prize-winning novel Buddha Da, Being Emily and the short-story collection, Hieroglyphics. Buddha Da was shortlisted for the Orange Prize, the Whitbread First Novel Award and the Scottish Book of the Year Award, and was nominated for the International IMPAC Dublin Literary Award. It received a Scottish Arts Council Award and won the Le Prince Maurice Award in Mauritius in 2004. She lives in Glasgow.