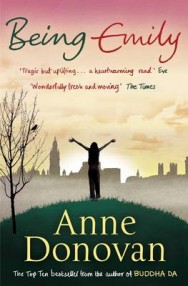 Home > Fiction from Scotland > Being Emily

Things are never dull in the O’Connell family. Still, Fiona, squeezed between her quiet brother and her mischievous line-dancing twin sisters, thinks life in their tenement flat is far less interesting than Emily Bronte’s. But tragedy is not confined to Victorian novels. And life for Fiona in this happy domestic setup is about to change forever. Following the devastating events of a single day, her family can never be the same. But perhaps, new relationships will develop – built on a solid foundation of love. Moving, funny and ultimately heart-warming, “Being Emily” is a wonderful novel about one young girl trying to find her place in the world amid the turmoil that only your own family can create.

Reviews of Being Emily

Anne Donovan is the author of the prize-winning novel Buddha Da and the short-story collection, Hieroglyphics. Buddha Da was shortlisted for the Orange Prize, the Whitbread First Novel Award and the Scottish Book of the Year Award, and was nominated for the International IMPAC Dublin Literary Award. It received a Scottish Arts Council Award and won the Le Prince Maurice Award in Mauritius in 2004. She has also written for radio and the stage and has been working on the screenplay for the film of Buddha Da. She lives in Glasgow.