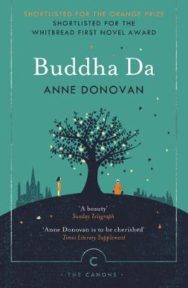 Anne Marie’s Da, a Glaswegian painter and decorator, has always been game for a laugh. So when he first tells his family that he’s taking up meditation at the Buddhist Centre in town, no one takes him seriously. But as Jimmy becomes more involved in his search for the spiritual his beliefs start to come into conflict with the needs of his wife, Liz, and cracks begin to form in their previously happy family.With grace, humour and humility Anne Donovan’s beloved debut tells the story of one man’s search for a higher power. But in his search for meaning, Jimmy might be about to lose the thing that matters most.

An enchanting novel in which ordinary lives are illuminated with extraordinary charm * * Daily Telegraph * * Her deliciously corkscrewed tale flows with the sap of everyday life * * Sunday Times * * A beauty . . . Had me engrossed to the end * * Sunday Telegraph * * Anne Donovan is outstanding — Melvyn Bragg Buddha Da reads like a Scottish Roddy Doyle, dealing with potentially heavy issues with an addictive blend of pathos and humour * * Observer * * Quirky and endearing. Don't wait until your next life to read it * * Sunday Herald * * A delightfully deadpan look at what happens when one family member decides that he's unlocked the secrets of the universe * * Independent * * An engaging account . . . Buddha Da recalls the early stories of Roddy Doyle . . . it has just enough humour to make the family compelling, and some delicate touches of insight – usually from Anne-Marie – that raise it above a suburban comedy — Katy Guest * * Independent * *

Anne Donovan is the award-winning author of the novels Buddha Da, Gone are the Leaves and Being Emily and the short story collection Hieroglyphics and Other Stories. Buddha Da was shortlisted for the Orange Prize, the Whitbread First Novel Award and the Scottish Book of the Year Award, and was nominated for the International IMPAC Dublin Literary Award. It received a Scottish Arts Council Award and won the Le Prince Maurice Award in Mauritius in 2004. She has also written for radio and stage and has been working on the screenplay for the film of Buddha Da. She lives in Glasgow.