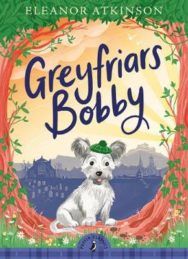 The famous classic Scottish tale based on the true story of a dog’s lifetime devotion to his master, first published in 1912, loved and widely read the world over.Bobby, a sparky silver-haired Skye terrier, adopts lonely shepherd Auld Jock, for his master and the two become inseparable. When Jock is dismissed by the farmer he tries to find work in the city, but sinks into poverty and dies, having suffered one cold winter too many.The farmer tries to reclaim Bobby as a pet for his daughter but the little dog remains faithful only to Auld Jock, guarding his master’s grave in Greyfriars Kirkyard in the heart of Edinburgh’s old town.By day, he plays with the local orphans and eats at a nearby tavern but, in spite of anything even the Lord Provost himself can do, Bobby returns each night to sleep by his master.Bobby’s devotion changes the lives of those around him and ultimately the conditions of the poor in Edinburgh. And as the years go by, the little dog’s loyalty is rewarded in a very special way.

Eleanor Atkinson was born in Indianapolis in 1863. Her most famous book is Greyfriar’s Bobby, published in 1912. Prior to her marriage to Francis Blake Atkinson in 1891 she worked as a reporter for the Chicago Tribune, under the penname of Nora Marks, championing women’s issues of the time. She died on Long Island, USA, in 1942.