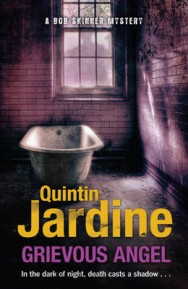 Edinburgh’s toughest cop, Bob Skinner, looks into his past to assuage his demons in Quintin Jardine’s thrilling new mystery. Skinner revisits his nightmares: old but not forgotten. Fifteen years in the past, newly promoted Detective Superintendent Bob Skinner is called to investigate a most brutal death. A man lies at the deep end of an empty swimming pool, his neck broken and almost every other bone in his body shattered. Soon, an organised crime connection looms, and bloody retribution spreads to a second city. Then violence erupts on a new front, as a vicious knifeman seems to be targeting Edinburgh’s gay population. As if this double dose of homicide isn’t enough for a single man with a teenage daughter to raise and protect, Skinner’s personal life takes a similar, perilous twist. Can he stay on the side of the angels, or will he fall …?

"Hard-hitting . . . longtime fans will relish the revelations about his childhood and the way he met series regulars like Mario McGuire and Andy Martin." –"Publishers Weekly"

Quintin Jardine gave up the life of a political spin doctor for the more morally acceptable world of murder and mayhem. Happily married, he hides from critics and creditors in secret locations in Scotland and Spain.