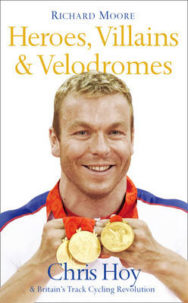 As the first Briton for 100 years to win three gold medals in one Olympic Games, Scottish track cyclist Chris Hoy has rewritten the record books. Critically acclaimed writer Richard Moore shadows Hoy throughout the current season – fully updated with events in Beijing – to provide an unprecedented insight into the secret world of track cycling. Heroes, Villains and Velodromes reveals how an elite athlete, Chris Hoy, lives, breathes and pushes the boundaries of his sport. How does he do it? And why? What drives him to put his body through the physical and mental hurdles to become the best in the world? And what is it like to be Olympic champion, astonishingly in three different cycling disciplines?This is also the story of an extraordinary year in the life of an extraordinary sportsman and his team, one which started with his best-ever world championships in Mallorca – where, for the first time in his career, Hoy became a double world champion – continued with his attempt on the world kilometre record in La Paz, Bolivia and two gold medals at the 2008 world championships in Manchester, before a glorious climax with seven golds for Hoy and the British track cycling team at the Beijing Olympics. By shadowing Hoy through a season, author Richard Moore has gained an unembellished insight into the mind of a World and Olympic champion. He has also attained unprecedented levels of access to the key members of the all-conquering British team and support staff, including top coaches, world-renowned psychiatrists, doctors (where the subject of drug abuse is an ever-present shadow) and the pivotal characters behind the scenes. Combining his forensic knowledge of the cycling world with his acclaimed skills as a tenacious investigative journalist, Moore captures the mood of the British team and explores an area of professional sport that has rarely been seen before.

'This is an absolutely must-read book…Moore has cleverly used the very cogent words of others to paint a picture of real characters within a new order' Graham Obree, Scotsman 'A cracking story…I couldn't put it down' Hugh Porter, BBC cycling commentator 'Like its hero, this book is the real McHoy.' Scotland on Sunday 'An excellent book'. The Sunday Times '…an inspiring tale. And in Richard Moore it has a splendid chronicler.' Independent on Sunday 'This is a must-read book that tells a story that had to be told.' The Scotsman '…a gripping inside story of how Team GB's cyclists rode to glory.' Independent on Sunday

Richard Moore is a freelance journalist who has written on sport, art and literature, contributing to the Scotsman, Scotland on Sunday, Herald, Guardian and Sunday Times. He was a member of the Scotland team in the Prutour, the nine-day cycling tour of Britain, and represented Scotland in the 1998 Commonwealth Games. His first book for HarperSport, In Search of Robert Millar, won Best Biography at the 2007 British Sports Book Awards.