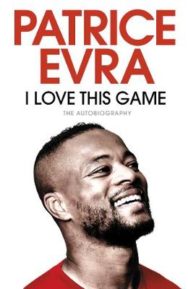 I Love This Game: The Autobiography

French full-back Patrice Evra, a cult hero to Manchester United fans, reveals the extraordinary story behind his rise to the top of world football.One of 26 siblings, Evra was born in Dakar, Senegal, and came to France at the age of one, growing up in a tough housing project near Paris. With crime a way of life around him, he found his escape in football and by the time he was 19, after a professional start in Italy, he was playing in the gilded surroundings of the Cote d’Azur, first for Nice then for Monaco. But it was at Manchester United, between 2006 and 2014, that he played his best football after being signed by Sir Alex Ferguson, helping the club to five Premier League titles and the Champions League in 2008 alongside Cristiano Ronaldo, Wayne Rooney and the rest. He immersed himself in the history of the club, and became a hero to the United crowd, before eventually leaving to go to more success at Juventus, where he mentored a young Paul Pogba on his way to becoming briefly the world’s most expensive footballer.There have been controversies along the way, including a notorious bust-up after he alleged Luis Suarez had racially abused him during a match and when as captain of France during the 2010 World Cup he led a strike against the coaching staff. He remains a hugely popular and charismatic figure in his sport, and has become an unlikely star of social media, with more than 4 million Instagram followers, thanks to his upbeat posts.I Love This Game is a book that captures that joy and passion for his sport, but it also reveals how hard you have to work to follow your dreams.