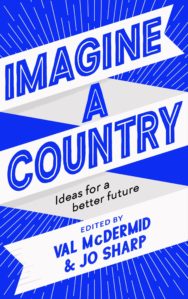 The first step on the road to change is to imagine possibility.

Imagine A Country offers visions of a new future from an astonishing array of Scottish voices, from comedians to economists, writers to musicians. Edited, curated and introduced by bestselling author Val McDermid and geographer Jo Sharp, it is a collection of ideas, dreams and ambitions, aiming to inspire change, hope and imagination. Featuring:

Val McDermid is a number one bestselling and award-winning author, whose novels have been translated into more than forty languages and have sold over sixteen million copies. Jo Sharp is a Professor of Geography at the University of St Andrews. The pair entered into a civil partnership in 2016.