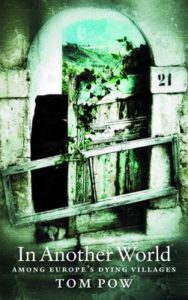 Home > Travel > In Another World: Among Europe’s Dying Villages

In Another World: Among Europe’s Dying Villages

In one of the great defining moments in human history, more people now live in cities than in rural areas, and the effects of this depopulation and the plummeting birthrate are being felt keenly throughout Europe, which has the fastest-declining population in the world. Tom Pow sets out to explore what this means in some of the most rapidly vanishing areas of Europe. From Spain to Russia, he uses the tools of his trade – travelogue, essay, story and poem – to make connections, not only with what he encounters in numerous dying villages, but to reflect on his own experiences of memory, identity and loss. In Another World is an open book: not an argument, but an invitation to remember, to reflect and to engage with one of the most significant social issues affecting Europe today.

Tom Pow was born in Edinburgh in 1950. He has won many awards for his writing, and is also an accredited storyteller. He is now Senior Lecturer in Creative Writing and Storytelling at the University of Glasgow, Crichton Campus, Dumfries.