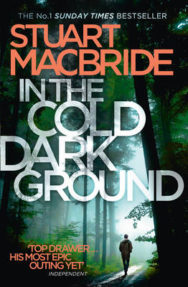 THE SUNDAY TIMES NO. 1 BESTSELLERThe tenth Logan McRae novel from the No. 1 bestselling author of THE MISSING AND THE DEAD and A SONG FOR THE DYING.Trouble is coming…Sergeant Logan McRae’s team find a body dumped in the woods – but is it the missing businessman they’ve been searching for, or something far more sinister? It doesn’t help that his ex-boss is taking over the case, a new Superintendent has it in for him, and Professional Standards are looming.Even worse: Aberdeen’s criminal overlord, Wee Hamish Mowat, is dying and rival gangs all over the UK are eying his territory.There’s a war brewing and Logan’s trapped right in the middle, whether he likes it or not.

Reviews of In the Cold Dark Ground (Logan McRae, Book 10)

`Top drawer … his most epic outing yet' Barry Forshaw, Independent`Skilful storytelling … a satisfyingly chunky, compelling thriller' Sunday MirrorPraise for THE MISSING AND THE DEAD:Exciting … a guaranteed bestseller' Literary Review`New Logan McRae novels are close to the top of my unmissable list, and yet again MacBride delivers. His chaotic cop hero is at his best. Superb storytelling' Sun`Another from MacBride's fantastic series of Logan McRae novels. A real page-turner' Sunday Mirror`Stuart's meticulous research shows. At times it feels like you are sitting in the back of a police car overhearing conversations between real policemen' Sunday Sport`Another riveting page-turner … emotional and affecting.' Independent on Sunday`Skilful storytelling … strong characterisation … both intriguing and engrossing' Laura Wilson, Guardian`The multiple plots move fast' IndependentPraise for Stuart MacBride:`MacBride is the natural heir to the late and much lamented Reginald Hill' Andrew Taylor, Spectator`MacBride is a damned fine writer – no one does dark and gritty like him' Peter James`Fierce, unflinching and shot through with the blackest of humour; this is crime fiction of the highest order' Mark Billingham`Some of the grittiest crime-writing in the field' Independent`Admirers of tough, modern crime novels will be in seventh heaven – or should that be hell?' Express`Ferocious and funny' Val McDermid`Hard-hitting prose with a bone-dry humour and characters you can genuinely believe in, Stuart MacBride's novels are a real treat' Simon Kernick

Stuart MacBride is the Sunday Times No. 1 bestselling author of the Logan McRae and Ash Henderson novels. His work has won several prizes and in 2015 he was awarded an honorary doctorate by Dundee University.Stuart lives in the north-east of Scotland with his wife, Fiona, cat Grendel, and other assorted animals.