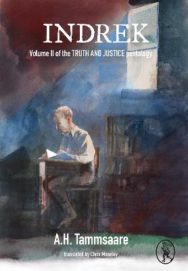 Home > Fiction from Scotland > Indrek: Volume II of the TRUTH AND JUSTICE pentalogy

Indrek: Volume II of the TRUTH AND JUSTICE pentalogy

A.H. Tammsaare was born Anton Hansen in 1878 into a poor farming family. His father Peeter was able to buy a farm, though the land was either stony or marshy. His dreamy nature was accompanied by an aptitude for study, and the family decided a little late in his teenage years to fund his education and he went to secondary education in Tartu from 1898 to 1903. And from 1903 to 1905, he worked as an editor at the Tallinn newspaper, Teataja. In Tallinn he was able to witness the Russian Revolution of 1905. While many Estonian writers supported it in part as a means for their own emancipation from the empire and German landowners, Tammsaare took a more cautious approach, supporting some of the aims but rejecting violence.In 1907 he enrolled as a law student at Tartu University, but in 1911 he was unable to sit his finals, as he became very ill with tuberculosis. He was moved to Sochi on the Black Sea and then to the nearby Caucasus Mountains, where his condition improved. On his return to Estonia, he lived for six years on his brother’s farm where he was again affected by illness. Unable to work, he threw himself into his studies and mastered foreign languages: English, French, Finnish and Swedish.After his marriage in 1920 to Kathe Veltman, he moved to Tallinn and embarked on the most productive period of his life. His greatest influences were the Russian classics of Dostoyevsky, Tolstoy and Gogol, but his work also shows the influence of Oscar Wilde, Knut Hamsun and Andre Gide. He occupies a central role in the development of the Estonian novel and is a figure of European significance. He died in 1940, in the midst of the Republic’s most difficult times.