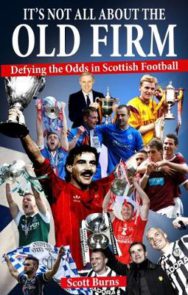 Home > Sports & Hobbies > Sports & Outdoor Recreation > It’s Not All About the Old Firm: Defying the Odds in Scottish Football

It’s Not All About the Old Firm: Defying the Odds in Scottish Football

It’s Not All About The Old Firm tells the inside stories of some of the Scottish game’s greatest achievements – how heroes and legends have overcome the odds, plus Celtic and Rangers. It covers every league title, European, Scottish Cup and League Cup victory from Sir Alex Ferguson’s time at Aberdeen to the most recent Hampden wins. Aberdeen and St Mirren’s League Cup wins are brought back to life along with the landmark triumphs of St Johnstone, Inverness, Ross County and Hibs’ historic 2016 Scottish Cup win. History makers such as Willie Miller, Steven Fletcher, Rudi Skacel, Gordon Dalziel, Stevie Kirk, David Goodwillie and Ian Ferguson offer insights into their greatest footballing moments. This updated edition includes a whole new batch of heroes such as Stephen Thompson, Stevie MacLean, Graeme Shinnie, Adam Rooney, Jim McIntyre and Alan Stubbs. From the goals and glory to the behind-the-scenes stories – from haunted hotels, and dressing-room bust-ups to betting scandals and personal heartbreak.

Scott Burns is a leading football journalist for the Daily Express, covering all aspects of Scottish football from domestic and European to international games. He has written a number of books on Scottish football, including the autobiographies of Kevin Drinkell, Sandy Clark and Kevin Twaddle, as well as Walter Smith – The Ibrox Gaffer: A Tribute to a Rangers Legend and Craiginches: Life in Aberdeen’s Prison.