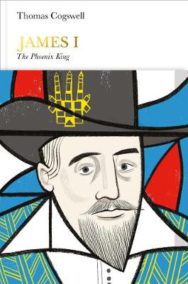 James’s reign marked one of the rare breaks in England’s monarchy. Already James VI of Scotland, he rode south on Elizabeth I’s death to become James I of England and Ireland, uniting the British Isles for the first time and founding the Stuart dynasty which would, with several lurches, reign for over a century. His descendant still occupies the throne. Thomas Cogswell’s dramatic new biography brings James to life as a complex, learned, curious man and great survivor, one who drastically changed court life in London and presided over the Authorized Version of the Bible and the establishment of English settlements across the globe. Although he failed to unite England and Scotland, he insisted that ambassadors acknowledge him as King of Great Britain, and that vessels from both countries display a version of the current Union Flag. Cogswell tells the story of James’s personal life and private passions as much as his public achievements. James was often accused of being too informal and insufficiently regal – but when his son, Charles I, decided to redress these criticisms in his own reign he was destroyed. This is a vivid portrait of an often underappreciated monarch.

Thomas Cogswell is Professor of History at the University of California Riverside. He is the author of The Blessed Revolution: English Politics and the Coming of War, 1621-1624; Home Divisions: Aristocracy, the State and Provincial Conflict and (with Alastair Bellany) The Murder of King James I. He is currently writing a dual biography of the Duke of Buckingham and his assassin, Lt. John Felton.