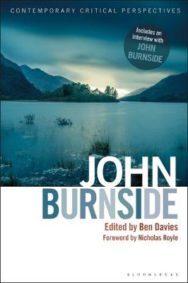 Celebrated as a poet, novelist and non-fiction writer, and the winner of numerous major literary prizes including the Whitbread Poetry Prize, the T.S. Eliot Prize and the James Tait Black Memorial Prize, John Burnside is one of Britain’s leading contemporary writers.John Burnside: Contemporary Critical Perspectives brings together leading scholars of contemporary literature to guide readers through the full range of the author’s writings, from his fiction and poetry to his autobiographical and nature writing, exploring texts such as The Dumb House, The Light Trap, A Lie about My Father, Glister and Black Cat Bone. The book examines the major themes of Burnside’s work, including the environment and the natural world, hauntings and dwelling, and his intertextual engagement with philosophy, music and the visual arts. Featuring a timeline of Burnside’s life, an interview with the writer himself and a detailed list of further reading, this is the first authoritative guide to this major contemporary writer.

Ben Davies is Lecturer in English at the University of Portsmouth, UK. He is the author of Sex, Time and Space in Contemporary Fiction (2016).