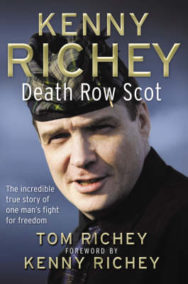 The incredible story of Kenny Richey, the innocent Scot on Death Row, told by his brother Tom and published to coincide with Kenny’s release When Tom Richey and his elder brother Kenny left their ordinary Edinburgh home to join their American father in a small conservative Ohio town, they could never have imagined the kind of tragedies that would befall them. Within a few years, Tom would be sentenced to sixty-five years in jail for murder and Kenny would find himself on Death Row, having been found guilty of deliberately causing the death of a two-year-old girl by arson. Told with candour and remarkable perception by Tom Richey, Death Row Scot was written in Tom’s prison cell. It is the story of why his brother’s life came to unravel in such a spectacularly devastating and incredible way. Tom looks at how Kenny’s death sentence was delivered after a catalogue of mistakes by the investigating police, Kenny’s legal team and the prosecution: A carpet from the burnt-out apartment was sent to be tested for the presence of accelerants AFTER it had lain beside petrol pumps. Samples from the wooden balcony were sent for similar tests AFTER the fire-damage had been repaired.Kenny’s legal team advised him to opt for a trial by a bench of three judges rather than a jury trial – something a more experienced attorney would NEVER suggest. What the prosecution said had happened would have been difficult enough but Kenny had a PLASTER CAST on his arm and he was known to be extremely DRUNK when the fire started. Over the eighteen years since his brother’s conviction, Tom has witnessed Kenny’s hopes being raised and dashed as, time and again, his appeals were refused. But now there are a couple of chinks of light – a court has reversed an earlier decision not to hear Kenny’s request for a writ of habeas corpus and the woman he intends to marry once he is freed is working tirelessly to ensure his release date comes soon.

TOM RICHEY committed murder while he was on LSD and the only thing that saved him from being on death row like his brother was his admission of guilt. He has spent his time in jail profitably, getting himself the education he missed out on when he was young.