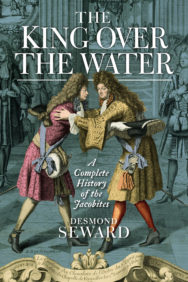 Home > History > The King Over the Water: A Complete History of the Jacobites

The King Over the Water: A Complete History of the Jacobites

This is the first modern history for general readers of the entire Jacobite movement in Scotland, England and Ireland, from the ‘Glorious Revolution’ of 1688 that drove James II into exile to the death of his grandson, Cardinal Henry, Duke of York, in 1807. The Battle of Culloden and Bonnie Prince Charlie’s flight through the heather are well known, but not the other risings and plots that involved half of Europe and even revolutionary America.

Based on the latest research, The King over the Water weaves together all the strands of this gripping saga into a vivid, sweeping narrative, full of insight, analysis and anecdote. ‘Few causes have aroused a more gallant response from the peoples of these islands than the Honest Cause’, writes Desmond Seward, ‘whether they were fighting for it at Killiecrankie, Prestonpans or Culloden, at the Boyne, Aughrim or Fontenoy, or dying for it on the scaffold’.

Desmond Seward was educated at Ampleforth and St Catharine’s College, Cambridge. One of the most highly regarded popular historians of his generation, he is the author of numerous books, ranging from studies of medieval kings to biographies of Napoleon and Hitler. His books The Hundred Years’ War and The Wars of the Roses are regarded as standard works on their subjects.