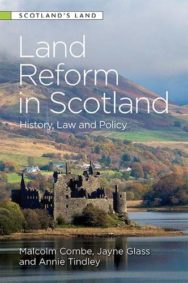 Land reform is as topical as ever in Scotland. Following the latest legislative development, the Land Reform (Scotland) Act 2016, there is a need for a comprehensive and comprehensible analysis of the history, developing framework and impact of Scottish land reform. Scholarly yet jargon-free, this landmark volume brings together leading researchers and commentators working in law, history and policy to analyse the past, present and future of Scottish land reform. It covers how Scotland’s land is regulated, used and managed; why and how this has come to pass; and makes some suggestions as to the future of land reform.

Malcolm M. Combe is a Senior Lecturer in law at the University of Strathclyde and non-practising solicitor

Jayne Glass is a Research Fellow in the Rural Policy Centre at Scotland’s Rural College (SRUC) and Honorary Lecturer at the University of Edinburgh. She was previously a Researcher at the Centre for Mountain Studies at Perth College UHI (University of the Highlands and Islands). She has undertaken a range of theoretical and applied research and consultancy projects related to land reform and land ownership in Scotland. She has co-edited and contributed to Land Reform in Scotland: History, Law and Policy (Edinburgh University Press, 2020) and Lairds, Land and Sustainability: Scottish Perspectives on Upland Management (Edinburgh University Press, 2013).

Annie Tindley is Senior Lecturer in History at the University of Newcastle-Upon-Tyne, with expertise in modern Scottish, British and imperial history, focussing on the Scottish Highlands, landed elites and empire. She is degree programme leader on UG and PG History courses and the first director of the Centre for Scotland’s Land Futures. She is the author of The Sutherland Estate, 1850-1920 (Edinburgh University Press, 2010), and Lachlan Grant of Ballachulish, 1871-1945 (co-edited with Ewen A. Cameron, Birlinn, 2015).