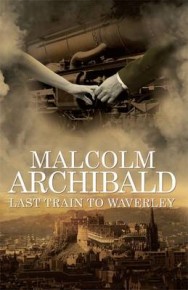 Last Train to Waverley is set in France in World War I, during one week in March 1918. The Germans launched their final major offensive of the war and pushed the British back thirty miles. One unit of the 20 Royal Scots were cut off. This book follows the fortunes of this unit, and the personal dilemmas of Douglas Ramsay, the officer in charge. Lieutenant Ramsay returns from hospital to the front line in March 1918. Before he has time to get to know his men, the Germans attack and break through the British lines. He is left in an isolated position with a handful of men. Most of his men are very young but he has two veterans in Sergeant Flockhart and Corporal McKim. Unfortunately Ramsay and Flockhart have a bad history, the details of which come out in a series of flashbacks throughout the book. Ramsay leads the survivors of the 20th Royal Scots back through the German lines to try and reach the always moving British positions. He is aided by Flockhart and McKim as he encounters various German formations on the way, including a crack Prussian platoon.As the Royals find their way back, the back stories of the sergeant and the officer are revealed through a series of flashbacks that show the social tensions and difference in lifestyles of the period. The book climaxes when Ramsay leads his men through the town of Albert in Picardy. The German advance slows as the soldiers loot the town. Ramsay’s men reach the British lines and a machine gun ambush wipes out the Prussian Guards.

Reviews of Last Train to Waverley

A Burden Shared: The Dundee Murders … an excellent crime novel, and an excellent historical novel. What really brings the book to life beyond the well crafted plot is the loving and often deeply grimy detail in which the Dundee of 1849 is drawn by Malcolm Archibald. The city becomes a leading character in the novel and we find ourselves navigating its often non-too salubrious streets alongside Mendick and his colleagues as they close in on a conclusion that is as shocking as it is unexpected. We enjoyed "The Darkest Walk", and feel that this second in the series sees Archibald and Mendick both getting into a very assured stride to produce a novel that is even better. We also feel the setting of Dundee suits Mendick perfectly. Let's hope he's back there soon… www.undiscoveredscotland.co.uk

Malcolm Archibald, has worked as a lecturer and in historical research as well as in a variety of other jobs. He writes historical fiction and non-fiction with the occasional venture into folklore, and believes that history should be accessible to everyone. A winner of The Dundee Book Prize, 2005, he has published several novels. Among the most notable are Whales for the Wizard, Powerstone, Mother Law and The Darkest Walk. His non-fiction titles include A Sink of Atrocity: Crime of 19th Century Dundee and Glasgow: The Real Mean City: True Crime and Punishment in the Second City of Empire. Malcolm lives in Moray with his wife Cathy.