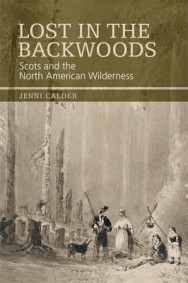 Home > History > Lost in the Backwoods: Scots and the North American Wilderness

Lost in the Backwoods: Scots and the North American Wilderness

This title shows how the American wilderness shaped Scottish experience, imagination and identity. How is the Scottish imagination shaped by its emigre experience with wilderness and the extreme? Drawing on journals, emigrant guides, memoirs, letters, poetry and fiction, this book examines patterns of survival, defeat, adaptation and response in North America’s harshest landscapes. Most Scots who crossed the Atlantic in the eighteenth and nineteenth centuries encountered the practical, moral and cultural challenges of the wilderness, with its many tensions and contradictions. Jenni Calder explores the effect of these experiences on the Scots imagination. Associated with displacement and disappearance, the ‘wilderness’ was also a source of adventure and redemption, of exploitation and spiritual regeneration, of freedom and restriction. An arena of greed, cruelty and cannibalism, of courage, generosity and mutual understanding, it brought out the best and the worst of humanity. Did the Scots who emigrated exchange one extreme for another, or did they discover a new idea of identity, freedom and landscape? The book draws on a wide range of Scottish, Canadian and US source material.It illuminates overlooked aspects of the Scottish diaspora experience. It extends the frontiers of Scottish history. It relates to current political, cultural and genealogical concerns.

Jenni Calder worked with the National Museum of Scotland from 1978 to 2001 (including Head of Publications and script co-ordinator for the Museum of Scotland exhibitions), since when she has worked as a freelance writer and lecturer.