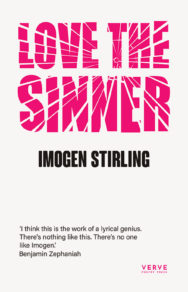 Love The Sinner is the second collection from poet and theatre-maker, Imogen Stirling. A fusion of poetry, theatre and electronic music, it will premiere as a stage show later in 2022.

The seven deadly sins are alive and kicking hard in contemporary Scotland. Swooping from the mundane to the immense, Stirling’s long-form poetry weaves narratives of human experience. A loose alliance of extraordinary and unextraordinary characters struggle to comprehend their identities in a world bladed with criticism and obsessed with self-betterment. This story sees ancient roots clasp hands with modern compassion to explore human frailty, love and resilience, while the threat of ecological crisis rumbles in the background.

Imogen Stirling is a Glasgow-based artist. She is a performance poet, theatre-maker, musician, writer and facilitator.

Imogen has performed her work extensively around the UK and Europe, with partners including Sofar Sounds, BBC Scotland, Latitude Festival, Lindisfarne Festival, Neu! Reekie! and Aye! Write. She can currently be seen on Sky Arts’ BAFTA-winning show Life & Rhymes where she performed alongside Benjamin Zephaniah and Hollie McNish. Imogen was the inaugural Writer-in-Residence for Paisley Book Festival 2021 and is currently leading Wigtown Book Festival’s youth programme.

Her five-star debut show, #Hypocrisy, found critical and public acclaim on the festival circuit. A gig poetry show, it premiered at Latitude and Eden, before selling out runs at the Edinburgh Fringe Festival (transferring to London’s Theatre503 as part of their ‘Best of the Fest’ programme) and again at the Prague Fringe Festival (where she was shortlisted for Best Performer). #Hypocrisy was longlisted for the Amnesty International Freedom of Expression Award and shortlisted for the Saboteur Awards’ ‘Best Spoken Word Show’. The script was published by Speculative Books and the album released in collaboration with Superslide Media. Imogen’s upcoming show, Love The Sinner, is a poetry/electronic music fusion, presenting a modern retelling of the seven deadly sins. It showcased excerpts with Tron Theatre and Dundee Rep, and is currently supported by Vanishing Point. The book of Love The Sinner will be published by Verve Poetry Press in January 2022.