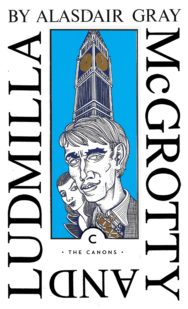 Mungo McGrotty’s career in Whitehall is going nowhere. But when he finds the mysterious (and deadly) Harbinger Report, he realises he can blackmail his way to the very top.This twisted Grayian retelling of the Aladdin story under the Thatcher regime sees our hero rise from pawn to power. But at what cost?

Reviews of McGrotty and Ludmilla

Gray transformed our expectations of what Scottish literature could be — VAL McDERMID One of the most gifted writers to have put pen to paper in the English language — IRVINE WELSH The best Scottish novelist since Sir Walter Scott — ANTHONY BURGESS Gray is a true original, a twentieth century William Blake * * Observer * * One of the brightest intellectual and creative lights Scotland has known in modern times — NICOLA STURGEON A necessary genius — ALI SMITH