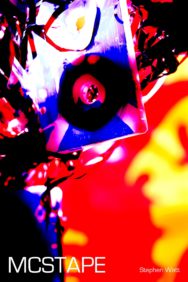 The third collection of Poetry from acclaimed Poet Stephen Watt is his love letter to Scottish Music and the Scottish Music scene. It features original poems on subjects and experiences close to his heart and includes contributions from many well kent faces from the Scottish Scene.

MCSTAPE (the first to be published by LNFG) was released at a special launch event at the 13th Note and featured contributions from published guest poets Dot Allison, Duglas T Stewart, Bobby Bluebell, James Yorkston, Ross Sinclair, Colin McCreadie, Pauline Lynch, Sushil Dade and many others.

Born in Dumbarton, Stephen Watt is a Scottish poet and spoken word artist. He was the Poetry Rivals Slam Champion in Peterborough in 2011. His online video Rubik was awarded the StAnza Digital International Poetry Prize and the Tartan Treasures Award. He has performed widely across the UK, including at Doune the Rabbit Hole, Eden, Wickerman, the Edinburgh Festival, and in Ireland as part of the unofficial Cuirt Literature Festival fringe show Far From Literature, We Were Reared in 2015. In 2016 he was the first ‘crime poet’ at the Bloody Scotland Crime Writing Festival, and his hometown team Dumbarton Football Club appointed him their Poet-in-Residence for 2016/2017. A collaboration with musician Gareth McNicol on a gothic music and spoken word project entitled ‘Neon Poltergeist’ produced his first recorded EP.

Watt’s first collection Spit appeared in 2012, and a pamphlet, Optograms, was published by Wild Word Press in 2016.