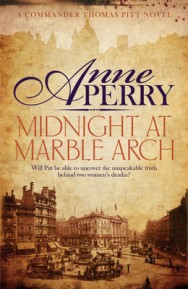 Loyal, honest and, above all, principled. There is no finer detective in Victorian London than Thomas Pitt. It is 1896, and Thomas Pitt is in charge of Special Branch. He is beginning to understand the power he now commands, but is still ill at ease at the glittering events he and his wife Charlotte must attend. During a lavish party at the Spanish Embassy, a policeman breaks into Pitt’s conversation with investor Rawdon Quixwood to break the terrible news that Quixwood’s wife, Catherine, has been viciously assaulted at their home, and left for dead. Worse still, it appears that the assailant was someone she had trusted as she opened the door to the attacker herself. At the same party, Charlotte sees Angeles Castelbranco, an ambassador’s daughter, flinch in fear at the teasing of some young men. A few days later, Angeles flees from the same group and, in her terror, falls from a window – what could have caused her to take that fatal step? Pitt and his friend Victor Narraway vow to uncover the unspoken truth behind these two women’s deaths. But as they investigate, deception and violence get ever nearer and danger is only ever one step away…

Reviews of Midnight at Marble Arch

Anne Perry is a New York Times bestselling author noted for her memorable characters, historical accuracy and exploration of social and ethical issues. Her two series, one featuring Thomas Pitt and one featuring William Monk, have been published in multiple languages. Anne Perry has also published a successful series based around World War One and the Reavley family, and the recent standalone novel The Sheen on the Silk. Anne Perry was selected by The Times as one of the twentieth century’s ‘100 Masters of Crime’. She lives in Scotland.