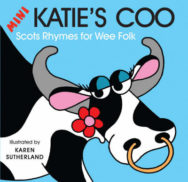 Katie Bairdie had a coo, Black and white aboot the mou. Wasna that a dainty coo? Dance, Katie Bairdie.”Mini Katie’s Coo” is the compact format of Itchy Coo’s popular first publication specially for babies and very young children, Katie’s Coo, a delightful board book illustrated in full colour throughout and containing some much-loved traditional Scots rhymes along with a few that are less well known.Parents and grandparents will enjoy singing or chanting the words to babies and toddlers while the bairns will love the combination of Scots words and sounds with the bright and simple illustrations by award-winning artist Karen Sutherland (“Animal ABC”, “A Moose in the Hoose”, “Eck the Bee”). Rhymes featured include favourites like “The Three Craws”, “Katie Bairdie”, “Wee Willie Winkie” and “Ally Bally Bee”.Developed in consultation with “Craigmillar Books for Babies” and the Scottish Book Trust, “Mini Katie’s Coo” is a safe, fun introduction for young children to easy Scots rhymes.

James Robertson and Matthew Fitt have written numerous books together in Scots, including Blethertoun Braes, King o the Midden, A Wee Book of Fairy Tales and A Moose in the Hoose. Karen Sutherland is an award-winning artist who is also the illustrator of Animal ABC, A Moose in the Hoose and Eck the Bee.