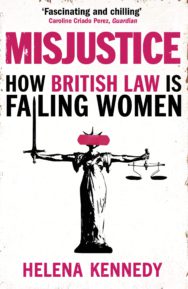 Two women a week are killed by a spouse or partner.

Every seven minutes a woman is raped.

The police receive one phone call per minute about domestic violence.

Now is the time for change.

Helena Kennedy forensically examines the pressing new evidence that women are being discriminated against when it comes to the law. From the shocking lack of female judges to the scandal of female prisons and the double discrimination experienced by BAME women, Kennedy shows with force and fury that change for women must start at the heart of what makes society just.

Reviews of Misjustice: How British Law is Failing Women

‘Helena Kennedy has written a chilling exposé of how the law has historically failed women. Taking no prisoners, Kennedy outlines the damage we must undo, and the changes we must make’ Amanda Foreman

Helena Kennedy QC is one of Britain’s most distinguished lawyers and public figures. She is a regular broadcaster, journalist and lecturer and throughout her career has focussed on giving voice to those who have least power in the system, championing civil liberties and civil rights. Her 1992 book Eve Was Framed led to a number of key reforms for women and was followed in 2004 by Just Law. She was the Master of Mansfield College, University of Oxford, from 2011 to 2018, and was awarded a life peerage in 1997. Born in Glasgow, she lives in London.