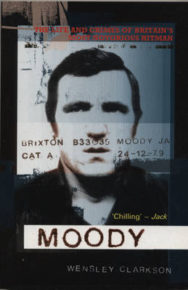 Home > Fiction from Scotland > Crime and Mystery > True Crime > Moody: The Life and Crimes of Britain’s Most Notorious Hitman

Moody: The Life and Crimes of Britain’s Most Notorious Hitman

Moody is the gripping biography of a criminal whose career spanned more than four decades and included encounters with Jack Spot, Billy Hill, Mad Frankie Fraser, the Krays, the Richardsons and the IRA.Jimmy Moody became the number-one enforcer for the Richardsons and tasted his first ‘kill’ – all before he’d reached 30 years of age. In the 1970s, he joined a team of criminals to form the Chainsaw Gang, who went on to become that decade’s most successful armed robbers. In 1980, Moody was in Brixton Prison awaiting trial for his pivotal role with the gang, when his life took its next dramatic twist. One of his fellow inmates was Provisional IRA hero Gerard Tuite and the two men joined forces with a third inmate to pull off a dramatic jailbreak. Moody was never recaptured. While on the run, he became intrigued by Tuite’s stories of brutality and torture inflicted on the Irish by the British. Soon, Moody’s murderous skills were being put to use in Northern Ireland. His secretive freelance hits on behalf of the Provos struck so much fear into the province’s security services that the Thatcher government put a three-man SAS hit squad on his tail.Moody’s victims were chillingly referred to as having been awarded an O.B.E. (One Behind the Ear). But while security forces in Northern Ireland searched for Moody, he’d actually set himself up in a flat in South London with a new identity. Moody believed his reputation as a hired killer would keep him one step ahead of trouble …

Wensley Clarkson is a journalist and the author of many other crimebooks, including Public Enemy No. 1, Doctors of Death, Whatever Mother Says, Hit ’em Hard, Killer On The Road and, most recently, Killing Charlie, which details the bloody hunt for Charlie Wilson, the infamous Great Train Robber.