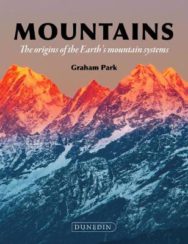 Most mountains on Earth occur within relatively well-defined, narrow belts separated by wide expanses of much lower-lying ground. Their distribution is not random but is caused by the now well-understood geological processes of plate tectonics. Some mountains mark the site of a former plate collision – where one continental plate has ridden up over another, resulting in a zone of highly deformed and elevated rocks. Others are essentially volcanic in origin. The most obvious mountain belts today – the Himalayas, the Alps and the Andes, for example – are situated at currently active plate boundaries. Others, such as the Caledonian mountains of the British Isles and Scandinavia, are the product of a plate collision that happened far in the geological past and have no present relationship to a plate boundary. These are much lower, with a generally more gentle relief, worn down through millennia of erosion. The presently active mountain belts are arranged in three separate systems: the Alpine-Himalayan ranges, the circum-Pacific belt and the mid-ocean ridges.Much of the Alpine-Himalayan belt is relatively well known, but large parts of the Circum-Pacific and ocean-ridge systems are not nearly as familiar, but contain equally impressive mountain ranges despite large parts being partly or wholly submerged.This book takes the reader along the active mountain systems explaining how plate tectonic processes have shaped them, then looks more briefly at some of the older mountain systems whose tectonic origins are more obscure. It will interest and inform both amateur and professional geologists who wish to learn more about the world’s great mountain systems.