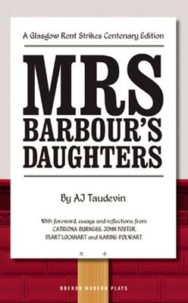 In 1915, Mary Barbour led 20,000 women in Glasgow’s Rent Strikes. Mary Barbour’s Army fought against evictions from their homes with bundles of washing, cooking pots and wooden spoons. They won. 100 years on, an old woman sits in a sinking Govan tenement, battling her memories and reaching for an idea of a time which put all of us first. The 2014 Oran Mor production, in association with the Traverse, played to sold-out audiences. This year the play returns to Glasgow to join the city’s celebrations of the centenary of the Rent Strikes when the Clydeside blazed with political activism. As well as the play, the book will include a history of the Glasgow rent strikes, an essay on Mary Barbour and a small collection of Scots political songs as a centenary celebration. Contributors to include feminist historian Catriona Burness, Trades Unions activist Mary Lockhart and Liz Lochhead.

As a writer, AJ Taudevin’s recent plays include: Some Other Mother, which premiered at the Traverse Theatre; The YelloWing (Scottish Mental Health Arts and Film Festival); The 12:57 (Theatre Uncut); and The Jean Jacques Rousseau Show and Demons (Oran Mor). She won the Playwrights’ Studio Scotland New Playwrights Award in 2010. As an actor, Julia Taudevin has worked for companies including the National Theatre, the National Theatre of Scotland, Traverse Theatre, Magnetic North, The Arches and Tron Theatre. Julia is also Associate Artist at the Tron Theatre, and is currently on a year-long attachment with the Traverse Theatre as one of the Traverse Fifty. Julia co-directed Beats and Hitch, both by Kieran Hurley.