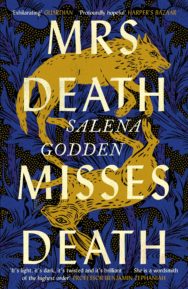 SHORTLISTED FOR THE GORDON BURN PRIZE

Mrs Death has had enough. She is exhausted by her job and now seeks someone to unburden her conscience to.

She meets Wolf, a troubled young writer, who – enthralled by her stories – begins to write Mrs Death’s memoirs. As the two reflect on the losses they have experienced (or facilitated), their friendship flourishes. All the while, despite her world-weariness, Death must continue to hold humans’ fates in her hands, appearing in our lives when we least expect her …

Salena Godden is one of Britain’s best loved poets and performers. She is also a broadcaster, memoirist and essayist and is widely anthologised; her essay ‘Shade’ was published in award-winning anthology The Good Immigrant.She has published several volumes of poetry, the latest of which was Pessimism Is for Lightweights, and a literary childhood memoir, Springfield Road. In November 2020 she was made a Fellow of the Royal Society of Literature. Mrs Death Misses Death is her debut novel. It was shortlisted for the Gordon Burn Prize 2021. Film and TV rights for Mrs Death Misses Death have been optioned by Idris Elba’s production company Green Door Pictures. @salenagodden | salenagodden.co.uk