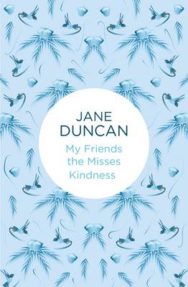 Home > Fiction from Scotland > My Friends the Misses Kindness

My Friends the Misses Kindness

After her husband’s death and her own breakdown, from which she has been rescued by her good friend Sashie, Janet Sandison sets sail from her West Indian home to return to Scotland and make a new life for herself as an author. She is beset by doubts, but as the days pass aboard R.M.S. Mnemosyne the personalities and dramas of her fellow passengers claim her attention more and more, not least of all the puckish child Helga, and the three elephantine sisters, the Misses Kindness, whose mission in life is to make everyone as much like themselves as possible. Behind their backs they are soon nicknamed ‘The Friendly Ones’ for, like the Furies of Greek mythology, they must be placated as well as, if possible, avoided. There are other Furies aboard too, for each passenger has his or her private interior demon; but in the young Second Engineer Janet finds an unexpected and rewarding friend, and as the ship draws near to England the threads of all their lives dramatically come together for a while.The deep vein of truth that underlies all Jane Duncan’s books is here at its most impressive and, together with her sharp observation of human nature and her story-telling skill, make this one of her most compelling novels.

Born in Scotland in 1910, Jane Duncan spent her childhood in Glasgow, going for holidays to the Black Isle of Inverness. After taking her degree at Glasgow University she moved to England in 1931, and when war broke out she was commissioned in the WAAF and worked in Photographic Intelligence. After the war she moved to the West Indies with her husband, who appears as ‘Twice’ Alexander in her novels. Shortly after he husband’s death, she returned to Jemimaville near Cromarty, not far from her grandparents’ croft which inspired the beloved ‘Reachfar’. Jane Duncan died in 1976.