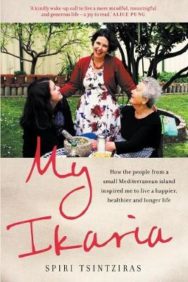 Home > Food & Drink > My Ikaria: How the people from a small Mediterranean island inspired me to live a happier, healthier and longer life

My Ikaria: How the people from a small Mediterranean island inspired me to live a happier, healthier and longer life

Three years ago, Spiri Tsintziras found herself mentally, physically and spiritually depleted. She was stretched thin – raising kids, running a household and managing a business. She ate too much in order to keep going and then slumped in front of the telly at night, exhausted, asking herself ‘What is it all for?’Spiri’s quest for a healthier, more nourishing life took her from her suburban home in Melbourne to her family’s homeland of Greece, and to the small Greek island of Ikaria. The people of Ikaria – part of the famous ‘Blue Zones’ – live happy, healthy and long lives. Inspired by their example, Spiri made some simple lifestyle changes and as a result lost weight, gained energy and deepened the connection to those closest to her. Best of all, she didn’t have to give up bread or wine!Spiri’s heartwarming memoir, which includes delicious family recipes, will console and entertain anyone bogged down in the daily grind – encouraging you to put your health and happiness first.

Spiri Tsintziras is the author of Afternoons in Ithaka (ABC Books, 2014) and co-author of the best-selling title Parlour Games for Modern Families (Scribe, 2009), which won ABIA Book of the Year in 2010 and has been translated into Italian and Chinese, and converted into an app called 50 Fun Games for the Whole Family. Spiri’s Tribal Tomato blog on food, family and connection, which explores similar themes to those explored in Ikaria has attracted more than 5000 followers.