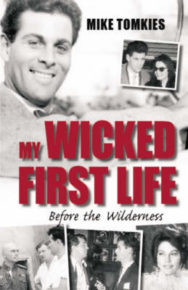 Home > Science and Nature > Natural History and Pets > My Wicked First Life: Before the Wilderness

My Wicked First Life: Before the Wilderness

In wildlife circles, Mike Tomkies is a legend – called ‘The Wilderness Man’. But here he tells the story of the very different first half of his life – before the wilderness years. He describes his boyhood, both idyllic and traumatic, his days with an extraordinary gamekeeper, his first love of nature, and running away from home to join the Coldstream Guards where he became an army athlete and saw active service in Palestine. Then follows his years as a cub reporter and successful amateur cycle racer – with hilariously funny narrative. An attempt to sail around the world in 1952 with a motley crew ended in shipwreck with an arduous 400-mile tramp from Lisbon to Madrid. He describes his first real love, his provincial reporter years and progress to Fleet Street where, having landed a major scoop by gaining an interview with Ava Gardner after her divorce from Frank Sinatra, he was elevated into writing for a best-selling magazine’s show business column. From then on he flies the world – Paris, Rome, Vienna, Madrid, Hollywood – getting ‘scoop’ interviews and having adventures with major movie stars.He has an amazing encounter with Mario Lanza, tracks down and spends three days with Elvis Presley at the time when he was an American soldier in Germany, and under strict orders not to speak to the press. He admits he became, for a time, a complete hedonist and was ‘arrogant, conceited and totally insufferable’, going through sports cars like a frustrated racing driver. His racy anecdotes about the other stars he met are fascinating – Sophia Loren, Errol Flynn, Burt Lancaster, Kirk Douglas, Yul Brynner, Clark Gable, Dean Martin, Rock Hudson, Frank Sinatra, Jayne Mansfield, Cary Grant, Paul Newman, Joan Collins, Peter O’Toole and Sean Connery are just a few who either reveal some of their secrets or give him unusual encounters. Tomkies describes how disillusionment finally sets in with both his work and himself – and why, at 38 he decides to start a new life and flies off to Canada. Long-demanded by Mike’s numerous fans, this searingly-honest and wide-ranging adventurous tale of his first life, will be of huge appeal to a very wide audience including anyone interested in the stars, celebrities and their biographies.This is a book which has it all – true-life adventures and stories of the stars all laced with exceptionally funny anecdotes.

Mike Tomkies is a well-known naturalist, writer and film maker and in earlier years was a Coldstream Guardsman and a showbiz journalist in Hollywood. He has lived for 35 years in remote and wild places in the Scottish Highlands, Canada and Spain and is an Honorary Fellow of the Royal Zoological Society of Scotland. His other books include Alone in the Wilderness, A Last Wild Place, Out of the Wild, On Wing and Wild Water, Wildcat Haven, and Moobli.