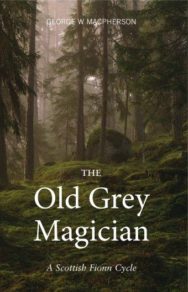 Fionn Cycle: A loose collection of tales originating in Scotland, Ireland and the Isle of Man which surround hunter-warrior leader Fionn (also known as Finn MacCool or Fingal), his band of men (the Fianna) and his poet son, Ossian.

Old Grey Magician: A mystical, morally ambivalent figure who appears throughout Celtic mythology; in Ireland he is the Dark Druid, and often he appears as a seabird. The shapeshifting sorcerer is a thorn in Fionn’s side, solving impossible problems but always asking too much in return.

George W Macpherson has been telling the traditional tales if Fionn and the Fianna for years, artfully drawing in audiences with his storytelling talent. Gathered from sources all over the country and occasionally beyond, and collected here for the first time, the Old Grey Magician’s exploits offer a fascinating insight into the traditions of Scotland and the development of oral storytelling. Situated in physical and literary history by Donald Smith, this book reminds us of the importance of retaining the stories that shaped us.

George W Macpherson has followed the oral traditions handed down through generations of his family, and has become one of the best known traditional storytellers in Scotland. George’s storytelling technique is both memorable and distinctive, capable of captivating any audience, young or old, all over the world. A participant in the Edinburgh Storytelling Festival for ten years, he also organises the annual Skye and Lochalsh Storytelling Festival and has opened the Commonwealth Heads of State Convention in Edinburgh with one of his stories. George lives in Glendale on the Isle of Skye.