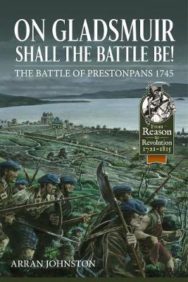 Home > History > On Gladsmuir Shall the Battle be!: The Battle of Prestonpans 1745

On Gladsmuir Shall the Battle be!: The Battle of Prestonpans 1745

In the summer of 1745, a charismatic (but inexperienced) young Prince sailed to Scotland – determined to wrest the crowns of Great Britain from the head of George II. In a few short weeks, he raised an army large enough to challenge the government’s forces in Scotland and, against the odds, stormed to a shocking victory over them at the Battle of Prestonpans. Celebrated ever since in song and art, Prestonpans nevertheless proved to be a false dawn on the road to defeat at the Battle of Culloden seven months later, but without his victory at Prestonpans and all the opportunities it provided, Charles Edward Stuart (‘Bonnie Prince Charlie’) could never have invaded England and his short uprising would then have been but a footnote in the history of Georgian Britain. This book – the climax of years of on-site investigation and source analysis – pieces together the events of the Prestonpans campaign in unprecedented detail. Focusing on the week of the battle, the author’s knowledge of the towns and villages through which the armies marched brings their motions vividly to life.Combined with eyewitness testimonies and close scrutiny of the evidence presented to the Board of Inquiry in 1746, this allows the reader to understand the build-up to the battle from an individual, as well as strategic, level. Such an understanding is revealed as critical, as the effects of morale, landscape and personality are shown to have determined the fate of the battle far more than the relative power of broadsword and bayonet. The book opens with an exploration of the battlefield area prior to the Rising, before analysing the political and military strengths and weaknesses of the opposing causes; this includes rarely-provided information on the career of Sir John Cope. After following the opening campaign in the Highlands, the reader is then taken on a detailed day-by-day journey through the week leading to the battle. The account of the engagement itself – driven by eyewitness testimony and contemporary evidence – also incorporates the latest archaeological analysis of the site to create the most detailed and engaging presentation yet of this famous and dramatic event.Its aftermath and legacy, both on a local and national level, is then considered before the book concludes with a look at the changes which have occurred across the battlefield landscape up to the present day. This is a study of one of Britain’s best-documented, but least analysed, battles – seen from within the landscape and communities around which it was fought. No longer should the two days of events which make up the Battle of Prestonpans be viewed simply as the prologue to a future defeat; instead, they are presented as they were understood at the time: as the climax of a month-long campaign which, it seemed, would determine the fate of Scotland.

Arran Paul Johnston was born and raised in Derbyshire, where he discovered an interest in the Jacobite Risings, which would later lead him to Scotland. He graduated from the University of Edinburgh with an MA (Hons) in Latin and Ancient History, and is currently undertaking doctoral research at the University of the West of Scotland. Arran is a trustee of the Battle of Prestonpans (1745) Heritage Trust and has been leading research and interpretation activities at the battlefield since 2006. In 2015, he established the Scottish Battlefields Trust to campaign for the greater protection and an understanding of fields of conflict in Scotland. Arran now lives with his wife and daughter in Dunbar and is the author of three previous books: Rebellious Scots to Crush: an Anthology, Valour Does Not Wait and Blood Stain’d Fields: the Battles of East Lothian.