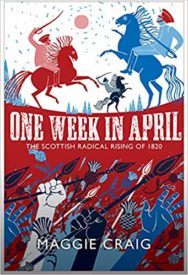 Home > History > One Week in April: The Scottish Radical Rising of 1820

One Week in April: The Scottish Radical Rising of 1820

In April 1820, a series of dramatic events exploded around Glasgow, central Scotland and Ayrshire. Demanding political reform and better living and working conditions, 60,000 weavers and other workers went on strike. Revolution was in the air.

It was the culmination of several years of unrest, which had seen huge mass meetings in Glasgow and Paisley. In Manchester in 1819, in what became known as Peterloo, drunken yeomanry with their sabres drawn infamously rode into a peaceful crowd calling for reform, killing fifteen people and wounding hundreds more.

In 1820, some Scottish Radicals marched under a flag emblazoned with the words ‘Scotland Free, or Scotland a Desart’ [sic]. Others armed themselves and set off for the Carron Ironworks, seeking cannons. Intercepted by Government soldiers, a bloody skirmish took place at Bonnymuir near Falkirk. A curfew was imposed on Glasgow and Paisley. Aiming to free Radical prisoners, a crowd in Greenock was attacked by the Port Glasgow militia. Among the dead and wounded were a 65-year-old woman and a young boy. In the recriminations that followed, three men were hanged and nineteen were transported to Australia from Scotland.

In this book Maggie Craig sets the rising into the wider social and political context of the time and paints an intense portrait of the people who were caught up in these momentous events.

Maggie Craig is the acclaimed writer of the ground-breaking Damn’ Rebel Bitches: The Women of the ’45, and its companion volume Bare-Arsed Banditti: The Men of the ’45. She is also the author of six family saga novels set in her native Glasgow and Clydebank. She is a popular speaker in libraries and book festivals and has served two terms as a committee member of the Society of Authors in Scotland.