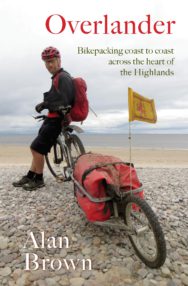 Seeking a temporary escape from city life and a mad modern world, Alan Brown plots out a personal challenge: an epic coast-to-coast trip through the wild and lonely interior of the Highlands.

He traverses paths historic and new, eschewing creature comforts and high-tech cycle gear, trusting his (mostly) serviceable mongrel bike. Armed with the essentials and a sense of adventure and curiosity, he discovers more about nature, history, people, his country, the concept of risk, and himself, than he ever thought possible.

Alan traces a route from Argyllshire’s Loch Etive across remote Rannoch Moor, the beautiful glens of Perthshire and dramatic Grampian terrain to reach the Moray Firth at Findhorn. Ready for all weathers and obstacles, he succumbs to the hypnotic daily routine of ride, eat, sleep, repeat. He’s savouring the landscapes, the wildlife and the solitude, and relishing the self-reliance. He is also picking up clues to past lives, and discovering how the land has been altered for game sports – or conserved for wild- and birdlife.

It’s a route where Alan gets to spend time with nature and himself, where he takes his time, wild camping under the stars, on a journey of discovery in which the whole is greater than the sum of its parts.

Born and brought up in Aberdeen, Alan Brown left to study environmental and then physical chemistry in Edinburgh, spurred on by a desire to know the particular workings of the world. He then worked as a research chemist, and later translator, in France for a few years where he developed a lifelong passion for the country’s language, culture and literature. Having initially sought refuge from the instabilities of academic life in Edinburgh’s financial and cultural institutions he then became a freelance programmer, analyst and change manager before giving in to the urge to write. The place of bicycles in a mentally and physically healthy life and in the circular economy of liveable cities is another enduring passion, and Overlander, his first published work, is in part an attempt to express the deep joy that can come from cycling an ordinary bike over any terrain, but especially through our hills and forests.