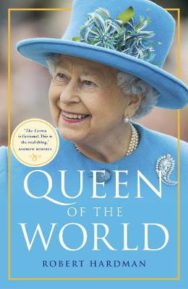 Home > Biography and Autobiography > Queen of the World

Queen of the World

`Dazzling, poignant and full of delicious surprises; the true story of how Elizabeth II took on the world – and won. The Crown is fiction. Here is the real thing.’ – Andrew Roberts_____________________________Written by the renowned royal biographer, Robert Hardman, and with privileged access to the Royal Family and the Royal Household, a brilliant new portrait of the most famous woman in the world and her place in it.On today’s world stage, one leader stands apart. Queen Elizabeth II has seen more of the planet and its people than any other head of state, and has engaged with them like no other monarch in British history.Since her coronation, she has visited over 130 countries across the ever-changing globe, acting as diplomat, stateswoman, pioneer and peace-broker.She has transformed her father’s old empire into the Commonwealth, her `family of nations’, and has come to know its leaders better than anyone. In 2018, they would gather in her own home to endorse her eldest son as her successor.With unprecedented access to the Queen’s family and staff, Hardman tells a true story full of drama, intrigue, exotic and even dangerous situations, heroes, rogues, pomp and glamour – and, at the centre of it all, the woman who has genuinely won the hearts of the world.

Robert Hardman is one of the foremost observers of the modern British royal scene, and the bestselling author of Our Queen. He has covered all aspects of the Monarchy for British newspapers, television and radio over more than 25 years and has interviewed many members of the Royal Family for his books and for a series of internationally-acclaimed films. These include Our Queen at Ninety (ITV 2016), Our Queen (ITV 2013), Charles at 60 (BBC One 2008), Monarchy: The Royal Family At Work (BBC One 2007) and The Queen’s Castle (BBC One 2005).As a newspaper journalist and columnist, Robert has also covered more than 60 royal tours worldwide. In addition to the British Royal Family, his royal interviewees have included the Emperor and Empress of Japan, the King and Queen of Norway and the Queen of Denmark. He now writes the acclaimed How I See It column for the Daily Mail. Married with three children, he lives in London.