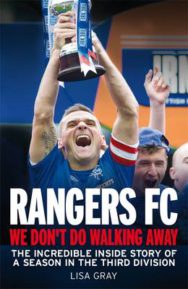 Home > Sports & Hobbies > Sports & Outdoor Recreation > Rangers FC – We Don’t Do Walking Away: The Incredible Inside Story of a Season in the Third Division

Rangers FC – We Don’t Do Walking Away: The Incredible Inside Story of a Season in the Third Division

When the Scottish Football League chairmen voted on the future of Rangers Newco in July 2012, most fans didn’t really expect that they would be dumped into Division Three. Many thought that hard-headed commercial realities would mean demotion to the First Division at worst. But when the decision was announced, the club had no option but to start a new football journey in the bottom tier of Scottish football. In Rangers FC – The Only Way Is Up, Lisa Gray captures the humour, the emotion and, of course, the football as the club sets out for an incredible season, visiting pastures new at Peterhead, Annan and Berwick amongst others. This is the inside story of both the team and the supporters as they adjusted to life in the Third Division – new players, new opposition and, of course, new pies. It has been an extraordinary season and this colourful account is a lasting memento of a unique season which will never be repeated.

Lisa Gray is the Chief Scottish Football Writer at the Press Association, and is their Rangers correspondent. Since 2000, she has covered Rangers games, reported on Old Firm derbies, Champions League games (home and away) and the UEFA Cup final in Manchester. She is also on the SFL voting panel which determines which players and managers pick up the monthly awards.