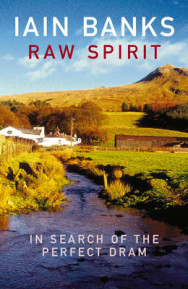 Raw Spirit: In Search of the Perfect Dram

As a native of Scotland, bestselling author Iain Banks has decided to undertake a tour of the distilleries of his homeland in a bid to uncover the unique spirit of the single malt. Visiting some of the world’s most famous distilleries and also some of its smallest and most obscure ones, Banks embarks on a journey of discovery which educates him about the places, people and products surrounding the centuries-old tradition of whisky production. Using various modes of transport – ferries to the islands, cars across the highlands, even bicycles between bus stops – Banks’ tour of Scotland combines history, literature and landscape in an entertaining and informative account of an exploration in which the arrival is by no means the most important part of the journey.

Reviews of Raw Spirit: In Search of the Perfect Dram

"…In the final judgement, it does what every good book should manage to do … and what a hundred other books on whisky (and a thousand other books on Scotland) have signally failed to do: makes you want to go for a drink with the author" Observer "Studded with bracing shots of pure insight and eloquence. And he's sound on the scotch as well" The Independent "It's a very readable and hugely informative book, and Bank's gentle humour permeates the pages" Time Out "It's an engaging piece of work, part love letter, part memoir" Esquire "A beautifully realised fusion of travelogue, social commentary and drinking guide. Scotland's most famous export is decanted into full-bodied, humorous prose." Independent on Sunday

Iain Banks was born in Scotland in 1954. He came to widespread public notice in 1984 with the publication of his first award-winning novel, The Wasp Factory. He went on to gain enormous and popular critical acclaim with further works of fiction and science fiction. In 1993 he was acknowledged as one of the Best of Young British Writers. He wrote bestselling science fiction books under the name Iain M Banks. He died from cancer in 2013.