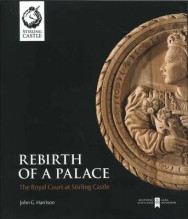 Rebirth of a Palace: The Royal Court at Stirling Castle

Begun in 1538, Stirling Palace was, and remains, one of the finest Renaissance buildings in Great Britain. Its structure and decoration – interior and exterior – were designed as a flamboyant expression of wealth, power and sophistication. It was commissioned by King James V as a residence fitting for himself and his French bride Mary of Guise, the mother of Mary Queen of Scots. But it was abandoned as a royal palace in the early 1600s, and soon fell into decline. In 2001 Historic Scotland launched a major programme of conservation and research at Stirling. A wealth of new information was gathered about the Palace’s history, and about the nature and significance of its decoration. This was used to inform a re-presentation of the Palace as it may have looked on completion. Its highlights are a set of seven Unicorn tapestries, The Hunt of the Unicorn, and the replica Stirling Heads, closely modelled on the wooden roundels that once adorned the Palace’s ceilings. The original Heads are now at the heart of a permanent exhibition. In this lavishly-illustrated book, Stirling historian John G.Harrison describes the revolutionary ideas that formed this magnificent building, the court it was designed to serve, and the long, painstaking process that has brought Stirling Palace back to life.