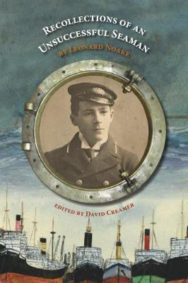 Recollections of an Unsuccessful Seaman

Recollections of an Unsuccessful Seaman was written in 1928/1929 by George Leonard Noake, who wanted to keep himself occupied for the rest of his days after learning of his incurable illness from which he died, aged 42 years, in 1929.Born in 1887, he joined the nautical training establishment, H.M.S. Conway, in 1903 and then served an apprenticeship at sea until 1908 when his detailed memoirs commence with him sailing as a second officer in the European/West African trade. After going ashore to work on a farm between 1913 and 1915, he returned to the mercantile marine in 1915 during the First World War to sail in a number of ships carrying horses, grain and coal. He survived not only being torpedoed in the English Channel, but also making 112 trips between England and Europe on a ship carrying war materials. Subsequently joining one of the largest tankers in the world, he endured a hazardous passage without a naval escort through the Channel to Rosyth to deliver safely the precious oil cargo before hostilities ended. The narrative of his wartime experiences are both harrowing and humorous.The tanker continued to trade in peacetime between Mexico and South America before eventually returning to Hull, where he signed-off to see his family after being away for seven months. War reparations had him travelling out to the East as a passenger to sail as second officer on board a German vessel bound for Europe, where the Depression after the war gave him no hope for further seagoing employment. Borrowing money from a relative in 1921 he bought into a farm before becoming a haulage contractor. On the verge of bankruptcy in 1923, he escaped his creditors by joining a ship bound for Australia as a quartermaster. Luck was on his side and upon his return home, he became master of a `Glasgow Puffer’ that had been converted to carry oil. He remained in the employ of the National Benzole Company to take command of three coastal tankers before accepting work as a chief officer on a ship trading in the Mediterranean. His seagoing career as a chief officer ended in 1927 when he was diagnosed with tuberculosis.Readers of this poignant portrayal of life in the 1900s, not only at sea but also ashore, will be thoroughly entertained and moved by the author’s experiences and humour. Leonard Noake was undoubtedly a true character, a person who enjoyed more than a tipple or two, a strong supporter of the fledgling unions being born in that era and an unrelenting critic of shipping magnates and their shareholders. The last chapter of the book has been published without correction or editing to permit the reader to make his/her own judgement of Len, his heartfelt style of writing and his passionately held beliefs.