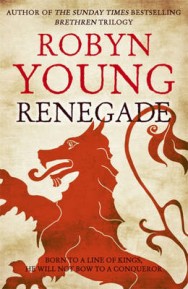 King Edward I of England marches on Scotland, inspired by an Arthurian prophecy and aiming to unite the British Isles under a single crown. One man alone can thwart Edward’s plan. But on the run in Ireland, hunted by a relentless assassin, Robert Bruce seems a long way from achieving his ambition. Born to a line of kings, Robert will not bow to a conqueror. Robert finds that to survive he must abandon everything he holds dear. He was always prepared to die on the battlefield – but who else must he sacrifice to keep his hopes alive? Renegade is a dazzling story of conspiracy and divided loyalties, battle and betrayal, and a superb portrait of the medieval world.

Robyn Young was born in Oxford and grew up in the Midlands and Devon. She has a Masters in Creative Writing from the University of Sussex and lives and writes in Brighton full-time. Her first novel, BRETHREN, was the bestselling hardback debut novel of 2006, with the paperback also going straight into the top ten bestseller list. Two more bestsellers followed, CRUSADE and REQUIEM, completing the Brethren trilogy, which has now sold over a million copies and been translated into nineteen languages. The inspiration for Robyn’s new trilogy, which began with INSURRECTION and continues in RENEGADE, grew out of an earlier research trip to Scotland. Robyn explains: ‘Day by day, out of the pages of history and the wild landscape, one figure came striding, larger, clearer than all the others – Robert the Bruce. He swept me off my feet and carried me into a story of bitter family feuds, two civil wars and the struggle for the crown. I realised there was no way this character could play a cameo role in another man’s story. His tale was too powerful, too intricate and too good to be cut down and boxed to fit.’ To find out more about Robyn Young and her historical novels, visit her website at www.robynyoung.com and her Facebook page at www.facebook.com/RobynYoungAuthor and follow her on Twitter @RobynYoung36