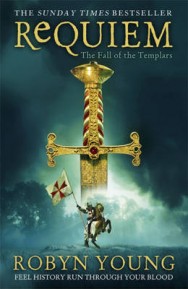 It is 1295. The Christian empire in the Holy Land lies in ruins and Will Campbell has barely escaped with his life. After years of fighting in the desert sun – and secretly working for peace with the Brethren – Will returns to Scotland to find his homeland under attack by King Edward I of England. Soon caught up in a bloody conflict, Will is unaware that an even more ominous threat is rising. A warrior king on the throne of France has a desire for supremacy and will stop at nothing to fulfil his twisted ambitions. A stunning, epic novel of war, savagery and the fall of the Templars in the tradition of Conn Iggulden, Bernard Cornwell and Manda Scott.

Young writes with remarkable accuracy, action-packed efficiency and gut-wrenching violence The Times Satisfyingly complex Sunday Telegraph Compared to Bernard Cornwell's Azincourt, REQUIEM is 'More rollicking, even more fast moving and breathless…so pacy' Heat's Boyd Hilton, speaking on Radio 5 Live Books Panel Fantastic baddies! Independent on Sunday's Suzi Feay, speaking on Radio 5 Live Books Panel Praise for the Brethren trilogy … BRETHREN is one of the best historical debuts in recent memory. Exciting and enthralling, it gripped me from the first page and left me waiting anxiously for the next instalment John Connolly Pacy and well-written, with vivid, convincing characters, Brethren captures your interest until the last page. I eagerly anticipate the sequel, knowing I will not be disappointed Alison Weir 'Engaging and enjoyable – Robyn Young brings the tumultuous medieval world to life with pace and flair' Tom Harper, author, Knights Of The Cross If you love the Templars, the Crusades, and the Middle Ages, this is the book for you. Robyn Young is an exciting new voice that speaks loudly Sharon Penman on BRETHREN A sweeping historical adventure with strong characters and serious verve…hits all the big emotional points…Can't wait for the next two volumes! Sarah Weinman on BRETHREN

Robyn Young was born in Oxford and grew up in the Midlands and Devon. She has a Masters in Creative Writing from the University of Sussex and lives and writes in Brighton full-time. Her first novel, BRETHREN, was the bestselling hardback debut novel of 2006, with the paperback also going straight into the top ten bestseller list. Two more bestsellers followed, CRUSADE and REQUIEM, completing the Brethren trilogy, which has now sold over a million copies and been translated into nineteen languages. To find out more about Robyn Young and her historical novels, visit her website at www.robynyoung.com and her Facebook page at www.facebook.com/RobynYoungAuthor and follow her on Twitter @RobynYoung36