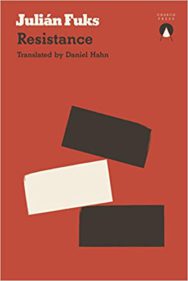 A young couple, involved in the struggle against the military dictatorship in 1970s Argentina, must flee the country. The brutality and terror of the regime is closing in around them. Friends are being ‘disappeared’. Their names are on a list. Time is running out. When they leave, they take with them their infant son, adopted after years of trying for a child without success. They build a new life in Brazil and things change radically. The family grows as the couple have two more children: a son and a daughter.

Resistance unfolds as an intimate portrayal of the formation of a family under extraordinary circumstances, told from the point of view of the youngest child. It’s an examination of identity, of family bonds, of the different forms that exile can take, of what it means to belong to a place, to a family, to your own past.

Already winner of the Jabuti Award for Book of the Year 2016 (Brazil), the José Saramago Literary Prize 2017 (Portugal) and the Anna Seghers Prize 2018 (Germany), Resistance demonstrates remarkable courage and skill by one of Brazil’s rising literary stars.

Julián Fuks was born in São Paulo in 1981 and is the son of Argentinian parents. He has worked as a reporter for the newspaper Folha de S. Paulo and as a reviewer for the magazine Cult. Fuks is the author of Fragmentos de Alberto, Ulisses, Carolina e eu (2004) and Histórias de literatura e cegueira (2007), which was a finalist for the Telecom Award as well as the Jabuti Award. His novel Procura do romance (2011) was shortlisted for the São Paulo Prize for Literature and longlisted for the Telecom Award. During 2017, Fuks has been working alongside Mia Couto, one of Africas leading writers, as part of the Rolex Mentor and Protégé Arts Initiative.