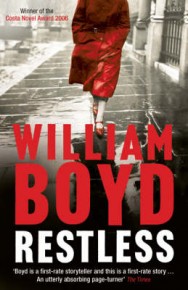 It is 1939. Eva Delectorskaya is a beautiful 28-year-old Russian emigree living in Paris. As war breaks out she is recruited for the British Secret Service by Lucas Romer, a mysterious Englishman, and under his tutelage she learns to become the perfect spy, to mask her emotions and trust no one, including those she loves most. Since the war, Eva has carefully rebuilt her life as a typically English wife and mother. But once a spy, always a spy. Now she must complete one final assignment, and this time Eva can’t do it alone: she needs her daughter’s help.

'Boyd is English fiction's master storyteller … Restless is that rare thing: a spy thriller from a first-rate narrative intelligence' Independent on Sunday 'Fast moving, densely plotted, beautifully observed and probably one of the best things Boyd has done' Esquire 'A good, rollicking read … pulls you deep in to the obscure, forgotten intricacies of wartime espionage … will keep you turning pages until the end' Observer 'Heart-stoppingly exciting … a riveting tale of wartime derring-do' Time Out

William Boyd was born in 1952 in Accra, Ghana and was brought up there and in Nigeria. He is the author of A Good Man in Africa, which won the Whitbread Literary Award for the Best First Novel in 1981 and a Somerset Maugham Award in 1982; On the Yankee Station (1982), a collection of short stories; An Ice-Cream War, which won the John Llewellyn Rhys Memorial Prize for 1982 and was shortlisted for the Booker Prize; Stars and Bars (1984); The New Confessions (1987); Brazzaville Beach, which won the James Tait Black Memorial Prize for 1990 and for which William Boyd was awarded the McVitie’s Prize for Scottish Writer of the Year; The Blue Afternoon, which won the 1993 Sunday Express Book of the Year Award; The Destiny of Nathalie X, a further collection of short stories, and Any Human Heart. William Boyd is married and lives in London.