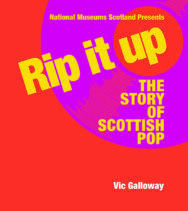 Home > Academic > Arts and Humanities > Rip It Up

In words and pictures, Rip It Up charges through the astonishing story of Scottish pop and rock music from the 1950s to the present day. It talks about the main players and protagonists, showing the evolution of myriad idiosyncratic genres and styles over seven decades. This book will accompany a major exhibition at the National Museum of Scotland 22 June to 25 November 2018, and a BBC Scotland TV series, presented by Vic Galloway, which explore the musical culture of Scotland from Lonnie Donegan to Calvin Harris.In telling the story of Scottish pop music the exhibition will feature clothes, photographs, instruments, memorabilia, props, film and, of course, music as well as interviews and archive footage.For a country of around only five million people Scotland has punched above its weight in shaping the twentieth century’s most important, accessible and radical art form – pop and rock music – which has gone on to influence film, fashion, design, visual art and politics. With added socio-political and economic context the book demonstrates how influential and vital Scottish acts have been over the years.

Vic Galloway is a BBC broadcaster, journalist, author and musician.