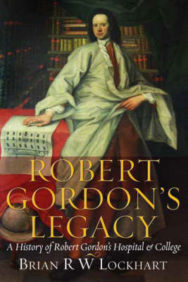 “Robert Gordon’s Legacy” is the story of Robert Gordon and his Hospital, or charity school, and College. Robert Gordon was determined to improve the educational provision of his age and this book explains the motivation which inspired him to leave his considerable fortune to benefit member of the burgess class who had fallen on hard times. It traces not only how, over the past two-and-a-half century, his Legacy has benefited the people of Aberdeen and beyond, but also the complex relationships between the School and the Technical College and its succesor, the Robert Gordon University. Furthermore, as the College developed into one of the largest and most successful of Scottish independent schools, the book tells of the rivalry which grew up with Aberdeen Grammar School.Using previously unexamined evidence, Brian Lockhart here makes a strong claim for “Robert Gordon’s Legacy” to be recognised more widely for its significant contribution to Scottish education.

Brian Lockhart was Headmaster of Robert Gordon’s College, Aberdeen, between 1996 and 2004, following senior posts at George Heriot’s School, Edinburgh, and The High School of Glasgow. Married with three grown-up children, he is a Governor of St. Margeret’s School for Girls, Aberdeen, and Hutchesons’ Grammar School, Glasgow, and a Burgess of Aberdeen.