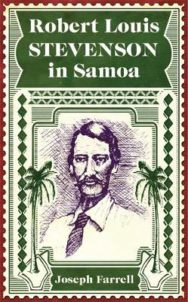 Almost every adult and child is familiar with his Treasure Island, but few know that Robert Louis Stevenson lived out his last years on an equally remote island, which was squabbled over by colonial powers much as Captain Flint’s treasure was contested by the mongrel crew of the Hispaniola. In 1890 Stevenson settled in Upolu, an island in Samoa, after two years sailing round the South Pacific. He was given a Samoan name and became a fierce critic of the interference of Germany, Britain and the U.S.A. in Samoan affairs – a stance that earned him Oscar Wilde’s sneers, and brought him into conflict with the Colonial Office, who regarded him as a menace and even threatened him with expulsion from the island. Joseph Farrell’s pioneering study of Stevenson’s twilight years stands apart from previous biographies by giving as much weight to the Samoa and the Samoans – their culture, their manners, their history – as to the life and work of the man himself. For it is only by examining the full complexity of Samoa and the political situation it faced as the nineteenth century gave way to the twentieth, that Stevenson’s lasting and generous contribution to its cause can be appreciated.

Joseph Farrell is Emeritus Professor at the University of Strathclyde. He is a renowned translator from the Italian, whose translations include works by Leonardo Sciascia, Vincenzo Consolo, Dario Fo and Valerio Varesi.