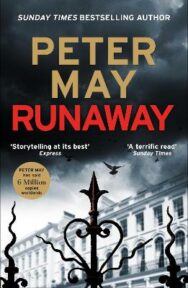 THE 12 MILLION COPY BESTSELLING AUTHOR OF THE LEWIS TRILOGY, THE ENZO FILES AND THE CHINA THRILLERSAWARD WINNING AUTHOR OF THE CWA DAGGER IN THE LIBRARY 2021’Peter May is one of the most accomplished novelists writing today.’ Undiscovered Scotland’No one can create a more eloquently written suspense novel than Peter May.’ New York Journal of BooksFIVE DREAMS OF FAMEGlasgow, 1965. Jack Mackay dares not imagine a life of predictability and routine. The headstrong seventeen-year-old has one thing on his mind – London – and successfully convinces his four friends, and fellow band mates, to join him in abandoning their homes to pursue a goal of musical stardom.FIVE DECADES OF FEARGlasgow, 2015. Jack Mackay dares not look back on a life of failure and mediocrity. The heavy-hearted sixty-seven-year old is still haunted by the cruel fate that befell him and his friends some fifty years before, and how he did and did not act when it mattered most – a memory he has run from all his adult life.London, 2015. A man lies dead in a bedsit. His killer looks on, remorseless. What started with five teenagers five decades before will now be finished.LOVED ENTRY ISLAND? Read the first book in Peter May’s acclaimed Lewis Trilogy, THE BLACKHOUSELOVE PETER MAY? Buy his new thriller, THE NIGHT GATE

Peter May was born and raised in Scotland. He was an award-winning journalist at the age of twenty-one and a published novelist at twenty-six. When his first book was adapted as a major drama series for the BBC, he quit journalism and during the high-octane fifteen years that followed, became one of Scotland’s most successful television dramatists. He created three prime-time drama series, presided over two of the highest-rated serials in his homeland as script editor and producer, and worked on more than 1,000 episodes of ratings-topping drama before deciding to leave television to return to his first love, writing novels.In 2021, he was awarded the CWA Dagger in the Library Award. He has also won several literature awards in France, received the USA’s Barry Award for The Blackhouse, the first in his internationally bestselling Lewis Trilogy; and in 2014 was awarded the ITV Specsavers Crime Thriller Book Club Best Read of the Year award for Entry Island. Peter now lives in South-West France with his wife, writer Janice Hally.