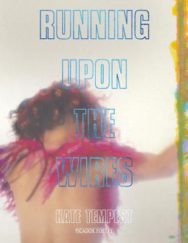 Running Upon The Wires

Running Upon The Wires is Kate Tempest’s first book of free-standing poetry since the acclaimed Hold Your Own. In a beautifully varied series of formal poems, spoken songs, fragments, vignettes and ballads, Tempest charts the heartbreak at the end of one relationship and the joy at the beginning of a new love; but also tells us what happens in between, when the heart is pulled both ways at once.Running Upon The Wires is, in a sense, a departure from her previous work, and unashamedly personal and intimate in its address – but will also confirm Tempest’s role as one of our most important poetic truth-tellers: it will be no surprise to readers to discover that she’s no less a direct and unflinching observer of matters of the heart than she is of social and political change. Running Upon The Wires is a heartbreaking, moving and joyous book about love, in its endings and in its beginnings.

Kate Tempest was born in London in 1985. Her work includes the plays Wasted, Glasshouse and Hopelessly Devoted; the poetry collections Everything Speaks in its Own Way and Hold Your Own; the albums Everybody Down, Balance and Let Them Eat Chaos; the long poems Brand New Ancients and Let Them Eat Chaos; and her debut novel, The Bricks that Built the Houses.She was nominated for the Mercury Music Prize for her debut album, Everybody Down, and received the Ted Hughes Award and a Herald Angel Award for Brand New Ancients. Kate was also named a Next Generation poet in 2014.